The transition from Kuali to Kualico has been a rough ride for all involved. Out of control and utter failure some might say. The process has eroded the reputation of open source in education and declining memberships and revenues have pushed the once passionate Kuali community to the edge of being just another failed IT venture. Not too long ago we were consistently hearing: 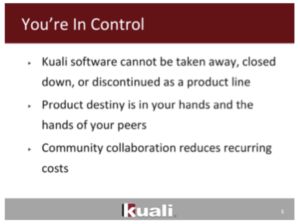 Not so much anymore. Basically, the software was taken away from the community and the licensing rights were given to KualiCo which imposed the new licensing; AGPL to ensure vendor lock-in. Product destiny is now in the hands of the for-profit KualiCo, rather than the institutions that formerly comprised the Kuali community. Community collaboration took a back seat to efforts to do rent seeking. Also, one of the original products; Kuali Student, was discontinued after the community spent $40 million on it.
Changing Leadership
Press releases are normally pretty boring.   However, one recent press release is particularly interesting because it chronicles a certain individual’s change in positions within their organization. In this press release there is no mention of Sakai or Kuali. For most people that would be no big deal. However, it is fascinating this is omitted for this person because as recently as the 2012 NACUBO Annual meeting it seemed pretty important as seen below: 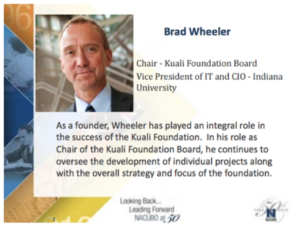 How can this erasure be considered anything other than a vote of no confidence for a set of tools which consumed over a decade of this person’s professional life?   A 2007 University Business article quotes a line that was used in one form or another for the entire Community Source era of Kuali:

There is no worry that a parent company is going to abandon the higher education client base for a more lucrative market.

As we fast forward to the present that is precisely what has occurred with a product called Kuali, then Kualico and now Kuali. Since the August 2014 announcement of a move to a commercial structure called KualiCo or Kuali, Inc. (yes I know it is confusing but this is all by design in desperation) it appears a significant erosion of open source activity in higher education has taken place. Since that time the former longtime chair of the Kuali Foundation has also stepped down from that role and as discussed in the previous text has washed from their past perhaps what as recently as 2014 would have been two major career cornerstones. Brad Wheeler washing Kuali from his past is a big warning sign.
The Numbers Don’t Lie
Several weeks ago word on the street was that the Kuali Foundation has cut KualiCo’s research admin. software (called Kuali Research) funding by $60K per month since the KC project is out of money. I am guessing this will mean…something has to go.
Let’s take a look at some published facts; that is the audited 2015 publicly available financial statements for the Kuali Foundation. I’ve learned that the FDP Conference in DC earlier this year was buzzing with the talk about the Kuali financials.
The latest Kuali financial statements do provide information on how Kuali Inc. was financed and the flow-through funds that continue. It also shows some of the financial impacts on the foundation itself. For example, all of their investments in CDs were liquidated.
The notes, as expected, described the Kuali Inc. financing. It was funded by a convertible interest-bearing loan of $1,000,000 from the foundation rather than as equity as we were told. The terms and conditions of the conversion to equity were not provided. The “veto” that the Kuali representative on the Kuali, Inc. board has over the sale or merger appears to be a condition in the convertible note as the auditors describe it. However, the veto right would not be there if the note were to be paid off. If the note converts and the equity percentage it represents is small compared to the majority vote, the veto right would be meaningless as well. I am speculating that the “veto” right is something that was announced to appease the unhappy schools at the time of the commercialization announcement in an effort to use their funds to fund KualiCo and “encourage” the community members to become “customers” of KualiCo.
In general, the financial statement appears more positive than it should be, due to the way receivables are reported. In both 2014 and 2015 the assets included in-kind contributions projected for the ensuing 3 years. In 2014 project partner dues for the ensuing 3 years was included in the assets, but in 2015 this was increased to 5 years. So the KF is including projected revenue 5 years out and reporting it as current assets. I suppose that’s one way to do things, but it certainly does not give an accurate picture. If anything it makes the picture look better than it actually is.
Jim Farmer recently updated his previous Kuali financial analysis to include the 2014 – 2015 fiscal year.   There are many interesting items in this report, but the two most striking are shown below: 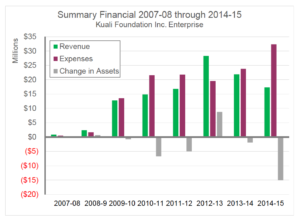 Jim rightfully points out that the term “Change in Assets” for a non-profit organization is equivalent to “profit” (or in this case loss) for for-profit organizations.
Now, about that drop in net assets between 2014 and 2015: in 2014 net assets were $24.4M, and by 2015 they had dropped by an alarming 61% to $9.4M; or in non profit terms….they lost $15 million of the members’ money.
Here is another fascinating slide from Jim’s analysis: 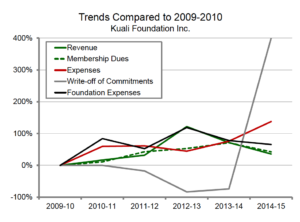 The following account for this:
The Kuali Foundation took a write-off of $11.7M in 2015 (as a comparison, it took a write-off of $0.6M in 2014). What this is telling us is that during the 12 months of the reporting year $11.7M of the projected receivables became delinquent, and therefore uncollectable, and thus were written off. Partners simply didn’t make their in-kind contributions or pay their dues. The net difference in this category between 2014 and 2015 was $11.1M. Year over year, the write-offs increased almost 500%!
The audited financials also show a decrease in the fair value of contributions receivable of $3.1M in 2015. In 2014 the change was $2K. Among other unobservable factors the probability of MOU default accounts for the drop in fair value. So, in addition to the write-offs in the paragraph above, the KF is projecting that there will be more receivables that become delinquent in the future due to more partners not making in-kind contributions or paying dues. For 2015 the fair value decreased by $3.1M.
Taken together these factors account for a decrease in net assets of $14.2M, and account for most of the decrease from $24.4M to $9.4M, a whopping 61%.
In a couple of recent conversations it was pointed out to me that another slap in the face to those who contributed to the project over the years is the non-acknowledgement in the financials or any other place to in-kind contribution of intellectual property (IP) to Kuali, Inc. Kuali acted as if the IP contribution wasn’t to them, but rather to the community (i.e., all of the Kuali member institutions). So they weren’t getting any sort of asset that had tangible valuable; rather the members were the beneficiaries. Were the project boards tricked into thinking that their codebases were worthless when they voted to transfer them to Kuali, Inc.?
In previous blogs, I pointed out many red flags about Kuali the non-profit and Kuali the for-profit. I also pointed out that funding and creating the for-profit Kuali, Inc. was a misappropriation of public funds and a violation of the fiduciary duty of the Kuali Foundation’s board of directors. From the very beginning, like many other people, I felt that the move to commercialization was a huge mistake and could not possibly succeed. There have been many attempts to spin things in a positive light by Kuali the non-profit and Kuali the for-profit. However, as one can see that with the latest audited financials posted, the numbers don’t lie.