KualiCo, The Kuali Community, and Other People’s Money

After posting recent blogs on the formation of KualiCo, I have been contacted by many people on both sides of the KualiCo/ Kuali.org discussion.  I think I would rather be in a pair of waders in the North Platte River than wading back into the Kuali conversation of the last couple months, however as mentioned in previous posts I have a small financial stake in a deployment of Kuali KC for the fine folks in our grant department and I have always had great hope for this software community…so here I go again.
I spent a good portion of last week at the annual Asterisk Community Conference and had a chance to sit on a panel discussing a deployment of 700ish VoIP phones and the possibilities surrounding deployment of open source Asterisk and/or Digium,the commercially supported open source version of Asterisk in an educational environment.
In case you’re not familiar with Asterisk it is a software implementation of a telephone private branch exchange (PBX). It was created in 1999 by Mark Spencer of Digium. Like any PBX, it allows attached telephones to make calls to one another, and to connect to other telephone services, such as the public switched telephone network (PSTN) and Voice over Internet Protocol (VoIP) services. Its name comes from the asterisk symbol, *.
Asterisk is released under a dual license model, using the GNU General Public License (GPL) as a free software license and a proprietary software license to permit licensees to distribute proprietary, unpublished system components.  Today, Asterisk is maintained by the combined efforts of Digium and the Asterisk community.
I spent some time conversing with several people at Astricon including David Hardy, Digium, Inc. · Director of Business Development,  David Duffet, Asterisk Community Director  and others from the Asterisk community.  Included among the numerous questions I asked during one of the conference luncheons was,

What would be the impact of a licensing change from GPL to AGPL for Asterisk?

It would kill the community

Hmmm…I hadn’t specifically mentioned the Kuali situation up to that point.  I did at that point fill them in on the Kuali transition and why I was asking.
In previous posts I have voiced mine and others concern over using public money intended to support a community to create a for-profit company.  I actually  have no problem with a for profit company…if that company were created with money from a venture capitalist, a philanthropic foundation, a loan from a friendly banker or even from grandma.
I also have no problem with the KualiCo discussion of keeping plans, strategy, etc unavailable (see page 3 of the latest version of the Kuali 2.0 information document) for the same reasons that other for profit companies do….if….if it weren’t my money potentially propelling the formation of that for-profit company.
Again, all this is fine if you’re using your grandma’s money to get this thing going but that simply is not the case.  This is about using other people’s money provided in good faith to create a community which is now being used to create a for-profit company.
Previously a paid membership would provide the benefits shown in the image below retrieved from Kuali.org. 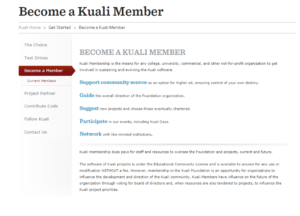 So let’s continue the conversation about other people’s money.  It should now be fairly obvious to anyone familiar with how membership in the Kuali Foundation works that partner institutions’ membership dues are the primary source of funds the for profit KualiCo, and that specifics related to KualiCo strategy and business plans are not available to those funding institutions.  I guess the new mantra is:

Those who provide the gold WON’T make the rules

This alone should have generated a broad, passionate and maybe animated response…..such as the one Seattle Seahawks cornerback Richard Sherman gave us last year immediately following the action packed playoff game with the San Francisco 49er’s.  That response was so animated that in American Culture “Richard Sherman” has become a verb as shown below:

Richard Sherman (shûrmn), v. — To utter or express with extravagance (typically on global television)  extreme displeasure that inspires public discourse on sportsmanship, race, culture, education, psychology and the end, or start, of civilization.

(NOTE: If you don’t watch professional American football you must watch the video below to have any chance of understanding the info above and this blog post)
Richard Sherman  video   https://www.youtube.com/watch?v=yjOkTib5eVQ
So much for the obvious.  What is less obvious, and something I believe no one has yet commented on in a public forum, is another set of funds comes from the support ecosystem, the membership dues of the KCA’s.  This leads me to one of the trickier questions:

Since that is the case, the purchase of former Kuali KCA rSmart (as a means to jump-start KualiCo) was done with reserves which at least partially came from membership dues paid by rSmart competitors (aka the other KCAs). Isn’t it the case then, that the KCAs essentially paid membership dues that were used to help fund unfair competition for themselves? That makes no sense.
If I paid membership dues intended to help fund a non-profit community to be of mutual benefit to all of the members, and then those funds were used to buy the services of a competitor…well, I might go all Richard Sherman on you.
I think most of the KCAs have been quiet primarily because they are worried about the amount of uncertainty created by the commercialization path being pursued. Institutions, individuals, and most of the KCAs may also have been mostly quiet because they are worried about preserving the community, the key historical selling point of Kuali
We recently heard how Kuali KCA Moderas responded….and guess what, they quit Kuali.  Unless the remaining KCAs drop their status of being a KCA as Moderas did, I guess they will be competing directly in the marketplace with KualiCo and will continue helping finance their competition.  Again this makes no sense.

It was pointed out to me by a professional colleague that at this juncture KualiCo is simply rSmart with a new name.   The annual meeting of the Society of Research Administration International provided the following:

I was also pointed to the exhibitor list for the event which took place last week as reinforcement for this thought.  Click here and you’ll see the following among the list of exhibitors:
Maybe I shouldn’t be surprised by the lack of KCA conversation but it is certainly interesting to note as they have always been touted as an integral part of the community.
The GPL to AGPL change
There also those who question the benefit of the AGPL licensing.  The Kuali Foundation and KualiCo want projects to switch to AGPL licensing which Dr. Chuck Severance says discourages competition and thus innovation, which can’t possibly be in the best interest of the users. The more options to choose from, the better for the users. If Dr. Severance is correct,  it is interesting that the foundation that criticized vendor lock-in for a decade is trying to do vendor lock-in itself now with the AGPL recommendation. 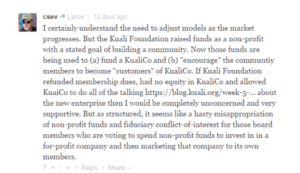 I have written many times about the importance of support ecosystems for Moodle, Digium and Kuali or any other true open source community.   With the recent changes, no matter how you slice it, the KCAs – the core of Kuali’s support ecosystem – will be competing directly with the Kuali.Co offerings, which will exist only because of the use of member dues.  Some of that comes from KCAs, but much of the rest is public money.  Many, such as Dr. Charles Severance have questioned  the use of public funds for starting such a venture as he did in commenting on another of Carl Straumsheim  articles  below:
This takes me back to my current world.  What about the entities that Kuali software is about to go head to head with?  Since the announcement of the path toward KualiCo by the Kuali Foundation in August I have been wondering about what Ellucian, PeopleSoft & Jenzabar must be thinking and saying…and I don’t think they are thinking and saying much of anything at this point. They are certainly chuckling at the sudden about-face.
Actually, a colleague relayed this exact reaction from their account rep (which is one of the three commercial companies listed above).  When the vendor was asked what they thought about the Kuali situation they simply got a laugh as a reaction.  I imagine some of these existing commercial entities are pretty happy now that Kuali.org established the for-profit KualiCo.  The tweet below came out right after the original announcement and although admittedly it is not quite accurate since the foundation is still in place alongside KualiCo it certainly has credence.

It is not that I think the traditional ERP vendors listed above with their pathetically bloated and overpriced software have any functional advantage on the administrative software front, but it certainly gives companies with deep pockets trying to get into this space such as Workday a greater window of opportunity with their recently announced Student Information System.
I have been very vocal in my blogs and in person about the potential, even in a small school environment, of Kuali for a long time. My VP of Finance was at NACUBO a couple years ago and stopped by the Ellucian booth. They struck up a conversation which included the Ellucian person saying:

Oh yeah your IT guy is the open source guy

….what can I say now?   Not much I suppose.  I have legitimately been pursuing a path to get small schools such as mine into the Kuali world and have admittedly used some of this banter about Kuali as leverage in negotiations for other things.  Now I am not sure what leverage I still have.
So Back to the Community…
Since these posts started I have been asked one common question by people who are in favor of the change and those who are against it:
What about the community?
In the Kuali community, a foundation board of directors, institutional members, commercial affiliates and individuals have been the key pieces of the overall community.  If you read the list of articles I posted last week as well as social media responses I posted earlier, it seems to me that there are missing pieces to the discussion.   Certainly, there has been lots of commentary on the Kuali situation by news outlets such as Inside Higher Ed, The Chronicle; consultant/ bloggers such as Phill Hill/ Michael Feldstein and even me.  The board has issued a few statements attempting to clarify what is happening. There are also a couple posts by the old rSmart, which benefits most from this change, if it works, discussing how great this KualiCo situation is. Other than this and a dissenting view by Moderas, a KCA which has chosen to discontinue its formal association with Kuali, the KCAs have been quiet. Institutions, KCAs and individuals really haven’t weighed in too much…and when it comes down to it, they are the real community. The groups that will ultimately speak the loudest may be the ones who are the quietest. The community is what has been attractive about Kuali to me all along. I think Phil Hill summed up all that was right about Kuali in the following blog post  reporting on the 2012 Kuali Days.
“Although this was my first Kuali Days, I was struck by the consistently eager and energetic attitude of attendees, especially by institutions in production, mid-implementation, or just kicking the tires.”
Here are some things to think about as Kuali Days 2014 approaches:

The real question as this moves forward is, can the heart and soul of the community reconcile the changes and work toward maintaining that community or will the community be lost?
2729 views on old host